So… we just woke up to Day 2 of our NYC adventure, and thought it would be nice to recap our first day at CMJ before it disappeared in a fog of partying.

I suppose the day started when we took the red eye from LAX to JFK. We arrive early at 5:30 am est, made our way to our beds for the week and passed out for a few hours.

Once we finally emerged, Keith got some “za” as we predicted, holding us up for a moment before heading to NYU to pick up our CMJ badges and goodie bags (aka postcards and samplers someone paid to put in a bag, that we threw away), where we ran into our friends from ONCE, who are now a bi-coastal band of sorts. Unfortunately their showcase was also Tuesday night. We agreed we’d be at each others shows in spirit, and off we went… in search of our Day 1 happy hour. We stumbled into a little bar called “Josies” (I think).  It was filled with charming fake Irish memorabilia, and a jukebox stuck in 1995. We sat down in a booth next to a framed Irish National anthem, and pulled out our CMJ schedules to look through to the tunes of Nirvana and Stone Temple Pilots. Oh joy. It was then we found out what type of music we play.  According to the official CMJ guide, we are “French-inspired indie lounge with rhythmic impetus” (no comment, lol).

A few $3 beers and apple martinis, and we were off to THE ROSE to sound check. After that the usual show stuff went on,  eating drinking, chatting etc. We headlined the show and were preceded by Brooklyn natives Backwords and Swimclub, and Cincinnati’s own Come On Caboose. All of the bands were fantastic, and generous enough to let us use some of their gear (I hope we didn’t spill too much beer). We met a ton of great people, the place was packed, the crowd was warm and welcoming, and hopefully we’ll be hangin out with the other bands we met later this week.

Thanks also to Zenobia Ortis who took some great pics for us. You can check them out on our Flickr Page! (This is a work in progress, by the way, since we’re uploading pics using a stolen internet connection that randomly cuts in and out.) 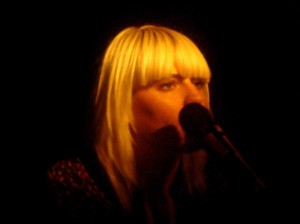 So now what, you ask? We’re heading to a few spots around town to do some gorilla acoustic performances with our handy little Flip camera, so we’ll share in a few days… stay tuned! Then its off to check out the Pure Volume Artist Lounge. We hear they’re doing free haircuts, so the beardos might get a trim.

Not much going in terms of shows tonight, we’ll probably roam from club to club for a while, and hopefully bump into some fellow LA bands.

PS. We’ll continue telling you all about our adventures on our TOUR BLOG, so keep checking back for more info!